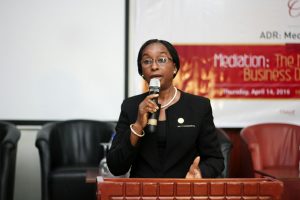 Mrs Funlola Adesola Odunlami was born on the 2nd of March 1961 to the Osinibi family of Ogun State. She had her secondary education at Queen’s School Ibadan and Government College Ibadan where she obtained her O’ Level and A’ Level Certificates respectively. She proceeded to University of Lagos Akoka, Lagos in 1978 for her Law Degree and graduated with LLB (Hons.) Thereafter, she obtained her BL at the Nigerian Law School in 1982 and returned to the University of Lagos, Akoka for her postgraduate degree- LLM (Hons).

Mrs. Odunlami joined the Lagos State Civil Service in 1987 working in the Civil Litigation Directorate. In 1991, she moved to Administrator-General & Public Trustee Directorate until 1996 when she was deployed to the Commercial Law Department and rose to the position of Director of Commercial Law, Ministry of Justice in 2006. She held that position until her appointment as Permanent Secretary on the Monday, 3rd August 2015.

As Director of Commercial Law, Mrs Odunlami also acted as the Registrar of Limited Partnerships in Lagos State. She was in charge of supervision of Commercial Legal Practice in Lagos State, drafting and vetting of Commercial Agreements, representing the State in Courts in Commercial and Contractual Matters, and Adviser to the State Government on all Commercial Matters. She is also an Arbitrator, Mediator and Negotiator. All of these duties she performed in an efficient and effective manner.

Mrs. Odunlami is blessed with two wonderful sons and enjoys travelling and reading.