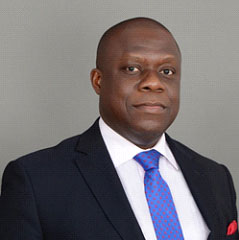 Mosediq Adeniji Kazeem hails from Isale-Eko in Lagos Island and was born in Lagos, Nigeria on 19th April 1965 to Late Honourable Justice Boonyamin Oladiran Kazeem a former Solicitor General of the Federation and Judge of Supreme Court of Nigeria and Princess Jemilat Adetoun Kazeem a daughter of late Oba Adeniji –Adele II of Lagos.

Mr. Kazeem then proceeded to University Lagos where he obtained a second class Upper degree in Political Science in 1986 with a special prize in Comparative political systems. He served his one-year statutory Nigerian Youth service at the Nigerian Institute of International Affairs as a Research Assistant before returning to the University of Lagos to study Law. He graduated with a second class Upper Law degree in 1990 with a special prize in International Law and was called to the Nigerian Bar in 1991. Mr. Kazeem also holds an LLM in Information Technology and Telecommunications Law from the University of Strathclyde in Glasgow, Scotland.

Mr. Kazeem’s professional career started in 1991 when he joined the International Consulting Firm of Arthur Andersen (Now KPMG Professional Services) and rose to Senior Associate in the Firms Tax and Business regulatory Services Division before voluntarily resigning in 1996. During his career at Arthur Andersen Mr. Kazeem was exposed to varied Tax, Consulting and Business Advisory training and experience.

In 1996 Mr. Kazeem set up the Law Firm of Adeniji Kazeem & Co to cater for local and International legal needs. He has since then run the full service Law Firm with offices in Lagos and Abuja. The Firm specializes in litigation and ADR, ICT Law, Intellectual property, Commercial Law and Company Secretarial services to the Public and Private Sector.

Mr. Kazeem is the author of the book Electronic Contract Formation and the Nigerian Initiatives and several other publications. He is a Notary Public of the Federation, member of the International Trade Mark Association, member International Bar Association, member chartered institute of arbitrators. He is also the National Legal Adviser of the Ansar-ud-Deen Society of Nigeria., Secretary of the Ansar-Ud-Deen Education Trust, member of the Board of Governors of Ansar-Ud-Deen College Isolo. He is happily married with children.

Mr. Kazeem was also the Deputy-Director General and Director of Legal Services of the Akinwunmi Ambode Campaign Organization.